Skip to content
Well after some gentle persuasion of MySQL the AOL-data.tgz files have surrendered some interesting, if not wholly unexpected, information about the relative strengths and click through rates of SERP positions.
The dataset contained 36,389,567 search queries with 19,434,540 clickthroughs. While we all knew the importance of the top 3 positions in the Google SERPs, this analysis further reinforces that fact: 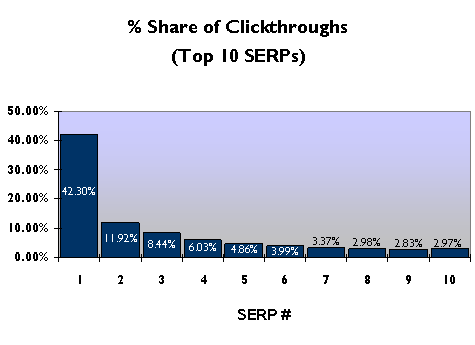 SERP Click Through Rate of Top 10 SERP Positions
Interestingly, the #1 SERP position recieves 42.3% of all clickthroughs. The #2 position only accounts for 11.92% of all clickthroughs – almost 72% less clickthroughs than the top position in the SERPs. Attaining the #1 position for your keywords/phrases results in nearly 4 times more traffic than that of your nearest rival – now that’s a serious difference in both traffic and potential revenue.
A #3 placement in the SERPs results in a 8.44% clickthrough rate, almost 30% less than the #2 and over 80% less than the top position on the first results page.
As we move down the page the rate of decline in clickthrough also falls. Notice that a #10 position in the SERPs receives slightly more clickthroughs than #9. This is most probably related to users glancing at the final listing as they scroll to the page navigation: 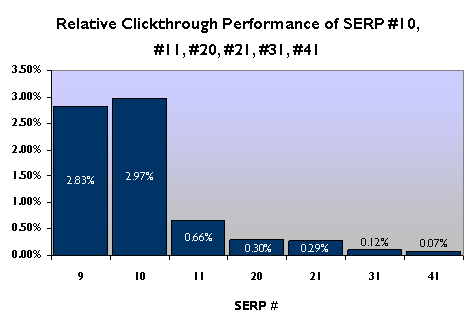 Click Through Rates of Google SERPs based on AOL-data.tgz
Here’s the same table in image format: 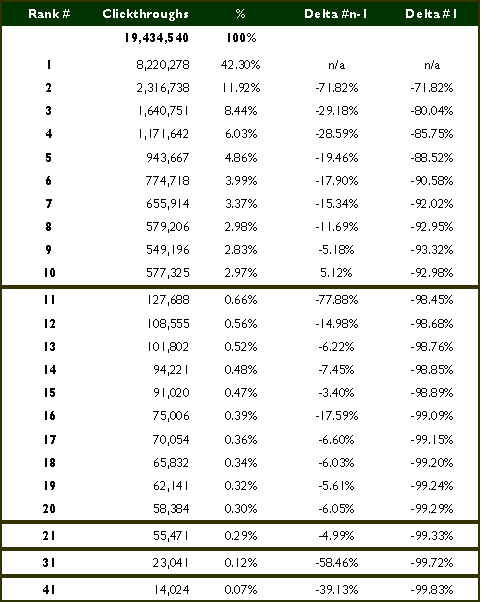 SERP Click Through Rates of Google SERPs based on AOL-data.tgz
The volume of clickthroughs for lower SERPs is so trivial that for all but the highest volume search terms these positions will generally yield little or no benefit to site owners (obviously some niches will prove to be exceptional).
The main message from the AOL data is that page 1 SERP is where the real action lies and #1 positions reign supreme.